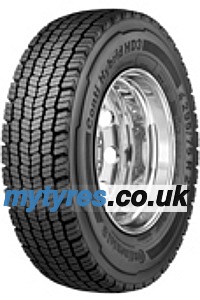 The ever increasing demands of today’s transport market require a new level of versatility for commercial vehicles. The new Conti Hybrid HD3 does more than that. With the highest mileage and lowest rolling resistance in its class, it is equally at home on city streets, motorways and uneven roads. Drive Axle Fitment.