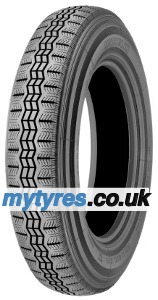 Michelin Innovation
The first major innovation from Michelin, the radial tyre was first marketed as the 'X' tyre in 1949. At that time, Lancia was the first car manufacturer to fit the X tyre as original equipment on the Aurelia model. From 1955 onwards, radial technology became more popular and the majority of European car manufacturers opted for the radial solution. The X could be fitted to cars of very different categories, from the original and popular 2 CV or Beetle to the fascinating Mercedes 190SL or Facel Vega.

Radial Technology
The advantages of the radial tyre compared with the cross-ply tyre could be clearly seen in all areas :